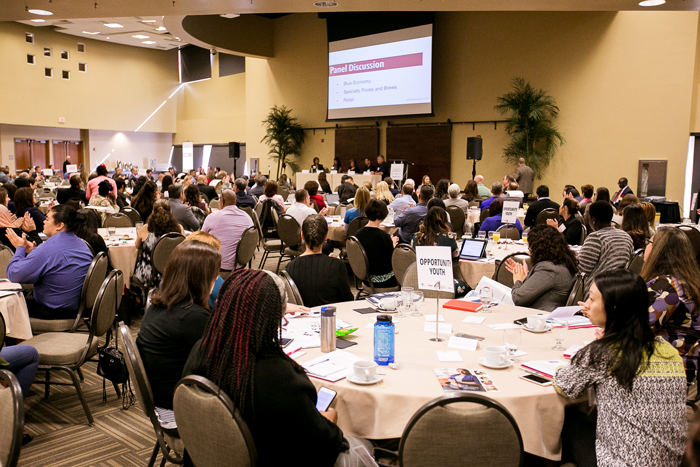 On November 2, 500 educators, community-based organizations, career counselors and community leaders gathered at the Jacobs Center for the sold-out Workforce Conference: The Future of Work.

Atkins said California recently passed Great Britain to become the fifth largest economy in the world, an additional reason for paying attention to the state’s industries and labor market, hence this year’s theme, the future of work.

The conference included an overview of each report with panel discussions from industry experts and employers, including representatives from Goodwill Industries of San Diego, Rough Draft Brewing Company, Trident Maritime Systems and Ocean Aero.

In addition, individuals representing different parts of the workforce offered their perspective. In a conversation about the gig economy, Alexxa Morgan, independent consultant and entrepreneur, advised young people to “focus on your strengths rather than weaknesses.” She also said gig jobs are great for testing the waters of different occupations. Basically, as Morgan said, “FIOMIH: Figure it out and make it happen!”

A highlight of the conference was the release of the In-Demand Jobs 2016 report. SDWP Research Manager Sarah Burns presented report findings and profiles of the top 55 in-demand jobs in San Diego County.

“We strive to provide free professional development to teachers, career counselors and other workforce professionals who may not interact with employers on a day-to-day basis,” says Ngo Bartel. “The conference is important in disseminating information to those directly working with job seekers. The research could immediately help them understand the skills, educational attainment and pathways necessary to meet employers’ workforce needs.” 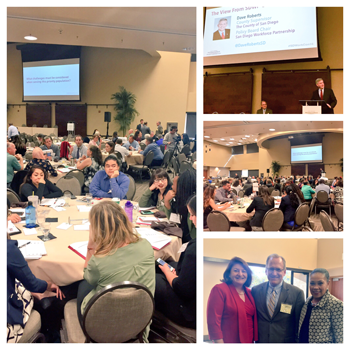 This was followed by lightning talks on the day in the life of an in-demand job, including presenters Shawn McClondon, Executive Director of Youth Campaigns, an organization that offers opportunities in digital media for talented minority and low-income youth; Miller Tran, Ph.D., Senior Scientist at Triton Algae Innovations; and Marcel Becker, General Manager of Repair Operations at Trident Marine Systems.

McClondon pointed out that “social media teaches young people to market themselves in the gig economy.”

Dr. Tran offered advice that goes beyond the sciences: “To be a good scientist you have to know how to fail. You also need a good imagination.”

Each offered unique opportunities and challenges in their respective industries. Silver said, “Breweries are manufacturer, distributor & bar/restaurant all in one.” Attendees also heard that the Blue Economy is often overlooked because 72 percent of employers employ fewer than 25 workers; there are still great opportunities as the industry is growing. Forsberg recalled a former boss’s words: “‪Retail‪ isn’t about selling a pair of pants; it’s about the customer’s experience.”

After a lunch catered by SDWP funded partner Kitchens for Good, groups participated in quick roundtable discussions on themes and populations served, such as opportunity youth, low-income, homeless, LGBTQ and disability issues.

Zhenya Lindstrom, Director at the Center of Excellence, San Diego and Imperial Region, then presented on community college student employment outcomes, sharing success stories such as that of Ernesto de Leon.

County of San Diego Supervisor Dave Roberts closed the conference by promoting the creation of jobs and workforce development.