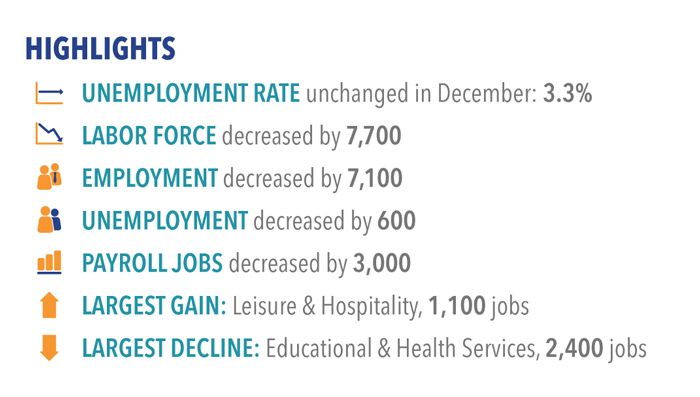 The California Employment Development Department (EDD) reported no change in San Diego’s unemployment rate from a revised 3.3 percent in November to 3.3 percent in December, remaining below the year-ago estimate of 4.1 percent.

Five sectors reported month-over job losses, and one sector experienced no change (Financial Activities). Educational & Health Services reported the largest month-over loss with 2,400 jobs, followed by Construction (down 1,300), Other Services (down 900), Government (down 500) and Trade, Transportation & Utilities (down 100). Overall, employers in San Diego County saw a loss of 3,000 net jobs in the past month.

“The unemployment rate remained steady this month, but jobs were in their usual seasonal flux,” said Phil Blair, Executive Officer of Manpower Staffing/San Diego. “While the 1,200-job loss in construction may seem alarming, it has been typical to see a drop in December, and compares to a 2,300 job loss in December 2016. We expect to see this fall a bit more in January, but start to recover in February and surpass 2017 job numbers.”

Between December 2016 and December 2017, nine sectors experienced year-over gains. Leisure & Hospitality experienced the largest year-over gains, adding 4,900 jobs to the region. Most of this growth came from a 3,500 job increase in Accommodation & Food Services.4 Educational & Health Services increased by 3,900 jobs, followed by Government (up 3,800), Construction and Other Services (up 3,300 each), Financial Activities (up 1,100), Manufacturing (up 900) and Information (up 300).

Trade, Transportation & Utilities continues to experience the only year-over loss of 2,300 jobs. Overall, employers in San Diego County have added 21,100 net jobs in the past year.

Four industry sectors in San Diego County experienced both month- and year-over job gains in December, with a total of nine sectors showing growth since December 2016. San Diego employers have shown a net loss of 3,000 jobs since November 2017 and a gain of 21,100 net jobs since December 2016. Additionally, San Diego’s unemployment rate of 3.3 percent remains lower than the California rate of 4.2 percent.