The San Diego Monthly Employment Report (July 2017 to August 2017) shows an increase in the civilian labor force, a decrease in employment and no change in the unemployment rate. 1 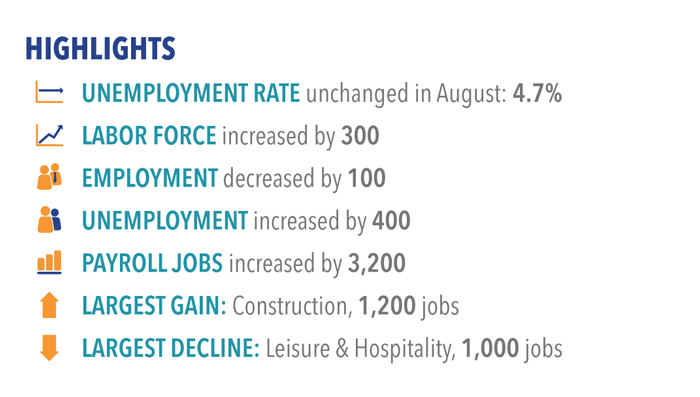 The California Employment Development Department (EDD) reported no change in San Diego’s unemployment rate from a revised 4.7 percent in July, remaining below the year-ago estimate of 4.9 percent. 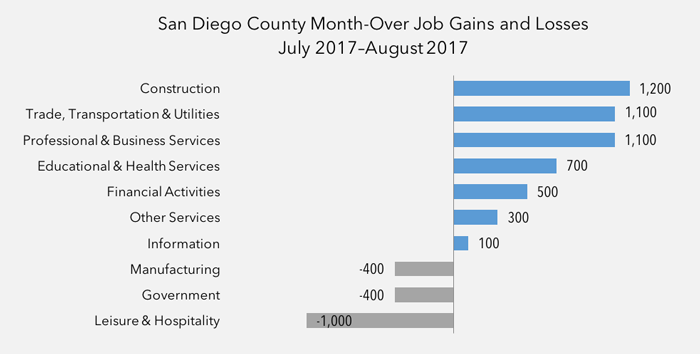 Between August 2016 and August 2017, seven sectors experienced year-over gains. Educational & Health Services showed the largest year-over gains, adding 5,200 net jobs to the region. Most of this growth came from a 5,600 job increase in Health Care & Social Assistance. 4 Other Services increased by 5,000 jobs, followed by Government (up 4,900), Financial Activities (up 2,900), Construction (up 2,800), Leisure and Hospitality (up 500) and Professional & Business Services (up 100).

Two industries experienced year-over losses and one industry experienced no change (Information). Trade, Transportation & Utilities experienced the largest year-over loss, down 1,200 jobs, followed by Manufacturing (down 1,000). Overall, employers in San Diego County have added 19,200 net jobs in the past year.

“Leisure and Hospitality jobs peaked early this year–the past five years haven’t seen this seasonal job turnover until September,” says Phil Blair, Executive Officer of Manpower Staffing/San Diego, “I’m very excited to see growth in Construction and Professional jobs, which is significant for high-paying jobs in San Diego. The next sector to watch is Retail Trade. If the retail apocalypse is truly upon us, we may not see as many opportunities for seasonal workers in the coming months. Now is the time to invest in building new skills.”