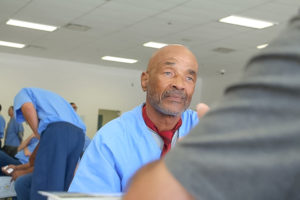 The Manhattan Institute published a report in 2015 that says “training designed to quickly place former inmates in jobs significantly decreases the likelihood that ex-offenders with nonviolent histories will be rearrested. Only 31.1 percent of nonviolent ex-offenders who received enhanced training were arrested during the 18 to 36 months in which they were tracked, compared with 50 percent of similar participants who received standard training.”

Before and during incarceration, many of those incarcerated at Donovan have been earning certifications, degrees and diplomas—credentials that increase one’s chances of getting a job.

With recent legal measures in California enacted by former Governor Jerry Brown, some inmates who were given life sentences as youth offenders will face the parole board over the next two years to have their sentences reconsidered.

While many of the individuals our staff met with at the event fell into this category, there were also many who have served the minimum sentences and will go before the parole board for potential release over the next year. 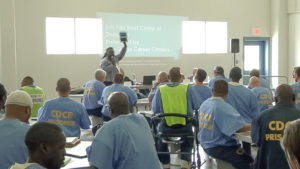 The job fair preparation event on April 4 included training for inmates offered by KRA Corporation, the operator of our career centers, and the Workforce Partnership.

As long-term success and reintegration into society depend heavily on employment upon exit from incarceration, plans must include clear pathways to careers. To that end, inmates learned how to develop a resume and a personal commercial, as well as finding hope and tying employment back to overall stability and reducing recidivism rates.

The training event concluded with a panel featuring Go Staff, a San Diego Temporary Agency, and legal assistance through The Reconcile Foundation.

The job fair itself took place the following week, where resource providers including housing and vocational rehabilitation services met with clients face to face. Several apprenticeship programs and employers were willing and ready to hire the inmates once they are released.

We can greatly reduce recidivism and empower formerly incarcerated individuals to become active and contributing members of our community in the future when workforce development takes place before inmates are released from incarceration.

Some takeaways from the events:

If you represent an employer or business interested in participating in the reintegration of our returning citizens and hire from this talent pool, there are a couple of ways you can participate: