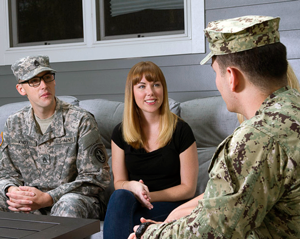 In an effort to better understand the priorities for military and veteran families, Blue Star Families releases an annual survey open to active duty service members, military family members, veterans, and veteran spouses. (The current survey is open through May 30.)

According to findings from the 2015 survey, 90 percent of respondents don’t feel the civilian public understands the lifestyles of military and veteran families. For example, many civilians are under the impression that military or veteran families have free childcare or paid housing. The truth is that childcare services can have long wait lists — sometimes of eight months or more — and a large percentage — about 30 — of one’s pay goes towards a family’s housing stipend.

To address the unique challenges faced by military or veteran families, Blue Star Families currently offers three programmatic areas of focus, pertaining to caregivers, arts and careers. Its career resources are tailored to military spouses who wish to work while their spouses are on active duty. According to Blue Star Families, nationally over half of the active duty spouses who aren’t working want to be employed — a rate of un- and underemployment far greater than the national unemployment average.

Some of the issues specific to the San Diego region include transportation, affordable housing and childcare.

Faced with these challenges and the constant moves, military and veteran spouses who are looking for work have a difficult time explaining gaps in their résumés, when in fact military spouses could be important assets for employers.

According to Kelly Wilson, Senior Advisor for Community Development, military spouses are “scrappy — they make difficult situations work and have game plans for sudden changes. They often need to make connections quickly and manage logistics on one’s own.”

In addition, many military spouses have the ability to translate skills across industries. One of the resources offered in the Blue Star Families employment toolkit demonstrates to military spouses how to craft language that speaks to HR so that gaps on a résumé can be explained and unique skills can shine through. The organization is also working with HR departments to help them understand the benefits of hiring military spouses.

“Military spouses are not looking for handouts,” said Wilson. “They are looking for opportunities.”

To learn more about Blue Star Families and how you can partner or get involved, contact Kelly Wilson at kwilson@bluestarfam.org.