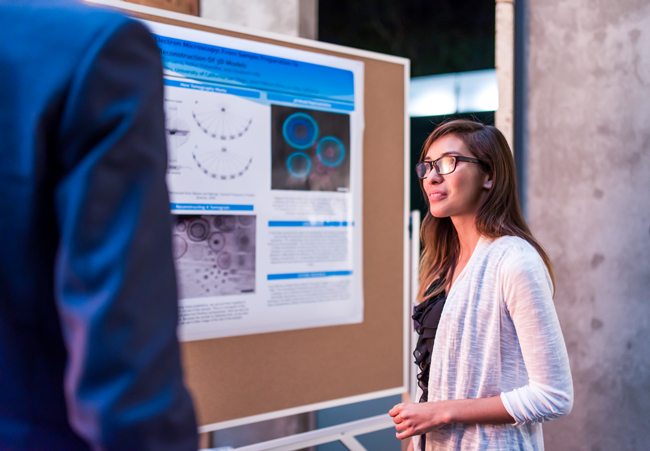 In some ways, Andrea is like many other high school students; she enjoys going to the movies with friends and works at a restaurant in her spare time.

In other ways, she is very much unlike many of her peers. A high school senior, Andrea has already had her work published on the websites of the University of California, San Diego (UCSD) and the Harvard Medical School’s original and largest teaching hospital, Massachusetts General Hospital.

Her mother and older sister, both property managers, and her father, a machine operator, are surprised about her pursuit of a career in the life sciences.

Though Andrea isn’t sure where her interest came from, she was listening closely when her former chemistry teacher at San Marcos High School, “Mr. V” (Jorge Valdivieso), told her about a program called Life Sciences Summer Institute (LSSI) during her sophomore year. Andrea has since interned twice at UCSD through LSSI, the first summer working with post-graduates in an immunology lab headed by David Traver, Ph.D., having been accepted into the Research Scholars program at UCSD through her application to LSSI. (Research Scholars is a part of UCSD’s Academic Connections working with Ed Abeyta, Ph.D. — Assistant Dean for Community Engagement and Director of Pre-Collegiate and Career Preparations Programs at UCSD Extension — and is a long-time partner of LSSI that has provided scholarship opportunities to LSSI applicants each year.)

“Her poster describing the work she did was absolutely beautiful and she could really explain a lot about the genetics she had learned. Andrea is a born scientist and artist,” says Elizabeth Komives, Ph.D., head of the Komives Laboratory at UCSD and a participating research faculty member of Research Scholars. “She exemplifies the newest acronym for the future of science: STEAM (science, technology, engineering, art and mathematics).”

More recently, Andrea spent three weeks on the UCSD campus (staying overnight in a dorm), working with Elizabeth Villa, Ph.D. and Reika (Watanabe) Castillon, Ph.D. at The Villa Lab on capturing images of cellular structures. This time around, in addition to Andrea’s internship at The Villa Lab, Dr. Komives asked Andrea to serve as a teaching assistant to the first-year Research Scholars participants.

Andrea’s parents were nervous about their daughter staying on campus for three weeks, worrying that she might get sick without family around to take care of her. Her family soon became very supportive of her experience, glad that she got to stay on campus while working in a lab.

“Every morning I would have breakfast with coffee in my dorm, then walk to the Natural Sciences Building,” Andrea says, describing a typical day in her internship. “They even gave me a key to the building so I could set up my computer every morning (before others arrived).” 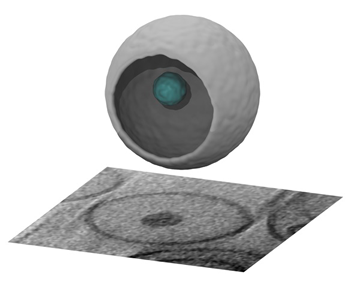 The Villa Lab is interested in a process called cryo-electron microscopy (“cryo-EM”), a way to observe specimens in their native environment in 2D without staining or changing anything in the molecular structure. During Andrea’s internship, the lab was working on a very important cancer-related collaborative project using a state-of-the-art technique called cryo-electron tomography (CET) — a 3D version of cryo-EM — to study how light could be used to treat cancer.

“We worked with a scientist from Harvard, Bryan Spring, Ph.D. (now at Northeastern University), who at the time had created a type of antibiotic that was photoactivatable, meaning the nanoparticles only break open if they’re induced by light,” Andrea explains. “It helps reduce toxicity in the body and localize tumors. We wanted to develop a 3D model of the environment to see what the cell looked like with a particle inside.”

It is clear Andrea has an understanding of the work beyond everyday high school biophysics.

“During her short stay, she very quickly grasped the concept of cryo-EM, which requires a substantial understanding of physics and mathematics,” shares Dr. Castillon. “She applied this knowledge to create a 3D reconstructed image called a tomogram and later extracted the valuable data set from the tomogram to present as a 3D model.”

Andrea’s image has since become associated with the study. A poster of Andrea’s work (seen in the photo) can be found here.

Of Andrea’s contribution, Dr. Villa says, “She worked on a figure my lab techs couldn’t do, so she taught herself scientific software — which certainly wasn’t very easy to use — and got it to work analyzing the data we have. This figure ended up in a lot of press releases like Harvard Medical School (the Massachusetts General Hospital), UCSD, etc.”

Not only that, Andrea is “fantastic, creative, self-directed, curious, a very pleasant person to have in the lab,” adds Dr. Villa. “Everybody loves her.”

Now that Andrea has completed two rounds of LSSI, she hopes to continue her studies at UCSD or the University of Washington, focusing on microbiology or global diseases, then attend medical school or pursue clinical research.

In addition to family, friends, teachers and LSSI coordinator Erika Aranguré, to all of whom Andrea gives special thanks, she has garnered new fans.

“I was really impressed with her potential,” Dr. Castillon says.

Dr. Villa agrees. “She’s going to be able to do whatever she wants in her life. We should definitely support people like Andrea.”

Applications for LSSI are now open through March 23. For those interested, Andrea has this advice: “Don’t let the application process discourage you. The lab is not a science classroom; things you learn in the classroom may not help you in the lab. Stay curious — that’s what makes your time in the lab more fun.”