The below story and photo are shared with permission from San Diego Second Chance. The below has been edited for clarity. 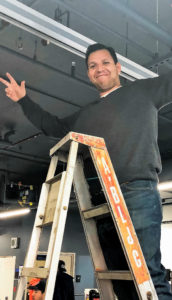 Six-year-old Juan ran away from home to escape an abusive, alcoholic father. He survived by sleeping in abandoned cars. He needed money to survive and began cleaning car windows and working at gas stations. When that wasn’t enough he turned to stealing, and eventually, selling drugs. He wound up in prison for the first time at the age of 14. Now, at 41, he has taken steps to begin a new life.

“I was tired,” he sighs. So he enrolled in the Second Chance Job Center program at East Mesa Reentry Facility, a collaborative effort involving the San Diego Workforce Partnership. “I met Alex and Estela. They were approachable and had so much passion about the programs at Second Chance and the opportunity to change. I listened and I felt like I finally mattered—that I was worth something, I have value.”

Upon release, Juan moved into a recovery center and fell back into what he calls a “machismo” way of thinking. “I thought I could stay straight on my own, but I couldn’t.” He was arrested for probation violation and was sent back to East Mesa for 30 days.

“I was scared,” he painfully recalls. “I ran into Alex again and he continued to encourage me to come to Second Chance. When I was released this time, I came to Second Chance but I was still arrogant. I thought, ‘I don’t need this program.’ As the class progressed, I found out everything I knew about the way I presented myself at a job interview or how I was answering questions was wrong! I said to myself, ‘I need to accept this opportunity and put my trust in them.’ It’s difficult to trust people when your mind is so screwed up and you’ve made so many bad decisions.”

After graduating JRT, Juan enrolled at City College. He currently works at the shipyard and looks forward to a career in HVAC. He also has reconnected with his mom, his sisters and his grown son, who now proudly tells his father, “I can talk to my friends about you!”

For further information about Second Chance, contact Maureen Polimadei at (619) 839-0953 or mpolimadei@secondchanceprogram.org.