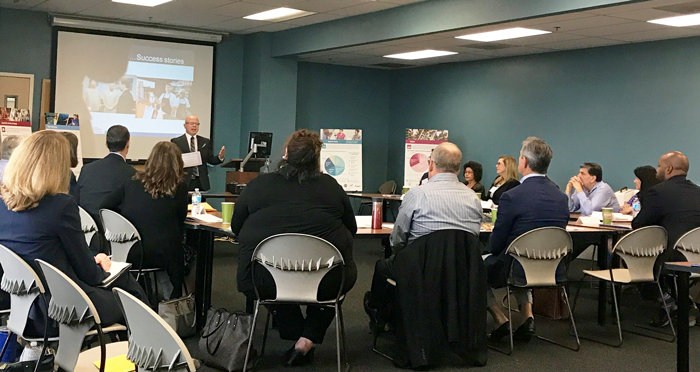 Roughly seven million Californians, or nearly one in three adults, have an arrest or conviction record, which significantly undermines efforts to obtain gainful employment. Research shows that employment is essential in reducing recidivism. Employment is key to helping formerly incarcerated people support themselves and their families. A job develops prosocial behavior, strengthens community ties, enhances self-esteem and improves mental health.1

Early this year, the South Metro Career Center launched New Beginnings, a five-day workshop series developed for individuals re-entering the workforce after being involved with the justice system. Since February, 54 participants have attended the series, which has a 90 percent success rate of participants finding and retaining employment after completion.

Christopher Johnson was in its first cohort. Here he shares his story in his own words as told during a workforce development board meeting. The following has been edited for brevity and clarity:

For several decades, “lifers” were not being released. It was a dark time. I did not give up on myself. I knew at some point I would be released back into society and I wanted to be prepared. I never wanted to give up hope. During my incarceration of 28 years I participated in numerous self–help groups, took workshop groups and attended two different colleges. I wanted to equip myself with the necessary tools to go to work.

Myself and another individual were referred to New Beginnings by my case manager at transitional housing. After all the years of being incarcerated, we had no clue to the new way of doing things. Back in the day, there were no cover letters; you just walked in and did an interview. This New Beginnings workshop, led by [South Metro Career Center career agents] Catherine McLean and Terrance Bowen, gave us so many tools. After nearly three decades of being incarcerated, I had no idea how to put together a résumé and cover letter. When preparing us for interviews they critiqued us on what questions to avoid and how to answer certain questions.

It was a very comfortable and relaxed atmosphere. Terrance worked with me in creating a résumé that overcame my lack of traditional employment history. He developed a résumé showing and highlighting my transferable skill and abilities I had gained from the different jobs I had over the 28 years in prison.

Catherine recommended and assisted me in not only finding an immediate job to satisfy my parole requirements but helped me find and explore a career path that utilizes my natural attributes and talents. [Another participant] Adrian and I were given a flyer for a job fair with local hotels and encouraged to attend. My career agent said that with my personality and the benefits within the hotel industry this might be a good fit.

When I was offered a job at the Sheraton San Diego Hotel and Marina, Catherine contacted my case manager at the transitional house, my parole agent, and HealthRIGHT 360 [an organization connecting people to effective and accessible rehabilitative resources after incarceration]. Through coordinated efforts, I was able to arrange a sober living residence within three days of my job offer. I was offered the job on Wednesday and moved into the sober living on Friday and started working on Saturday. My career agent was able to get me two months’ worth of bus passes and $50.00 in Walmart gift cards for work clothes.

Then I needed a hernia operation. Catherine advised me on how to approach management because I was worried since I had not been employed with the company that long. I requested a two–week leave of absence. They told me they would put me to work hosting and working the front desk, so I would not have to do any lifting. I was also given one week paid leave even though I had not acquired any paid leave time.

Both Catherine and Terrance were hands–on during the workshop, and more importantly, afterwards. They did not just go through the motions; their genuine interest in all of us in the workshop succeeding made all the difference. Long after the workshop was over, they were available in person or on the phone for advice or counseling. They showed they cared; this meant a tremendous amount to those of us in the workshop.

Follow–up care is paramount for people such as myself, after being incarcerated for nearly three decades. Long after the workshop is over, people such as myself still have questions and needs. The fact that there was a great deal of follow–up afterwards was a huge part of my success.

In the New Beginnings workshop, we discussed how my present circumstances did not determine who I was, just where I was presently. All things are possible if you believe in yourself. Perseverance, never give up, believe in yourself. Just keep looking forward and moving forward. Regardless of all the difficulties and restrictions I encountered. I chose to rise above it. I was focused. I keep my eye on the prize; I keep thinking long term and about the big picture.

My sister told me I was doing everything right. She told me my entire family was proud of me. My family has helped me considerably. I was short on funds to move into my apartment, so my sister Delaine gave me the funds I was short. Without my family’s support I would not be sharing a beautiful apartment in Little Italy.

Johnson has since been nominated for Employee of the Month, been promoted with a pay increase from a busser to food runner, offered a food server position and is currently up for another promotion. His success is one example of expert findings2 that people with conviction records have lower rates of turnover and higher rates of promotion.

“Success in reentry is so much more than reducing recidivism,” says McLean. “It means creating the conditions that enable returning men and women to have the best shot at a new beginning.”