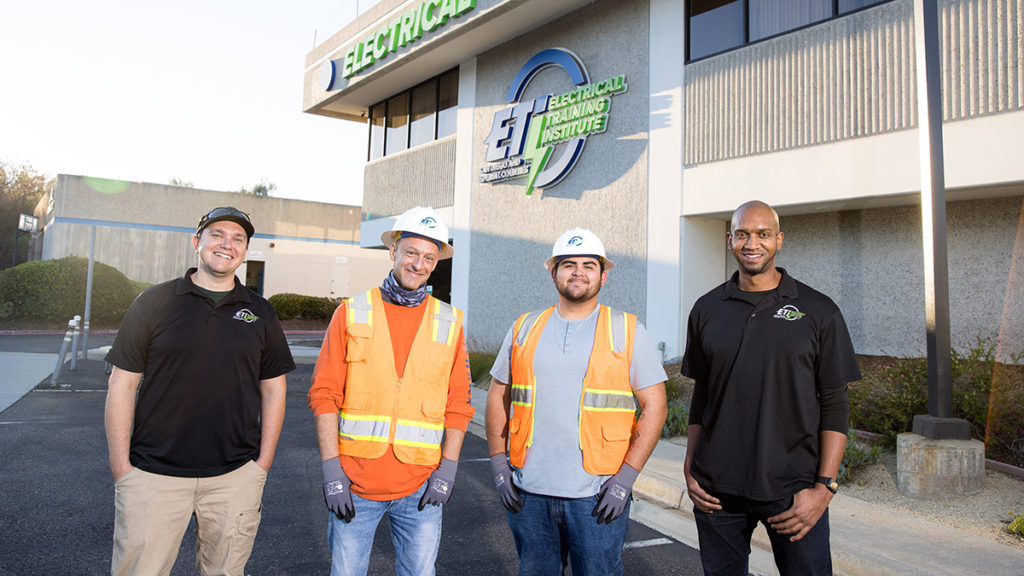 Providing opportunities for San Diegans to upskill or train in new fields means more residents qualified to work locally. As they earn specialized and in-demand certifications, gain on-the-job training, and participate in internships and apprenticeships, the quality of local talent increases. For businesses, this means they have access to a continual pipeline of equipped talent.

Through the San Diego Workforce Partnership, we can run a legitimate pre-apprenticeship that is making a positive impact on people’s lives.

Construction Career Jumpstart (CCJ), is an example of such a pipeline—connecting job seekers of diverse backgrounds to skilled training opportunities through the Electrical Training Institute (ETI). This ultimately leads to “career options with respectable starting wages,” says Kevin Johnson, training director and CFO of ETI. “Through the San Diego Workforce Partnership, we can run a legitimate pre-apprenticeship that is making a positive impact on people’s lives.” Garrett Camp, ETI project coordinator adds that, “the Electrical Training Institute students are literally building San Diego and Imperial Counties.”

CCJ is a four-week pre-apprenticeship program that teaches people skills to start a career in energy, construction and utilities. Workers in this pathway are equipped to become welders, linemen/linewomen, electricians, laborers and other skilled trades people, making $18–$19 hourly in entry-level positions, with huge potential for rapid growth in the industry.

“Since the 1970’s, the greater American community has unknowingly suffered from a misguided attempt to convince the general populous that the only way they can get a well-paying, respectable job is to go to college,” shares Marcus McGhee, outreach coordinator with ETI. “This was factually untrue in the past and continues to be untrue today. We are trying to dispel that myth.”

As of December 2021, three out of every four CCJ graduate has gained almost immediate employment through the International Brotherhood of Electrical Workers (IBEW) Union after completing the program.

In September 2021, CCJ became a union-approved pre-apprenticeship program, which means that CCJ graduates are now eligible to bypass aptitude tests and go directly to an interview if they apply for an apprenticeship, which offer on-the-job training while getting paid.

Removing the cost barrier to training is key to ensuring equitable access, which is intrinsic to ETI’s ethos. “We are here to serve the community in providing opportunities for everyone, regardless of background,” says Garrett. “Our mission is to create an opportunity for San Diego to become part of a skilled and passionate workforce. The cooperation between ETI and the San Diego Workforce Partnership creates more pathways for people to find a career they are passionate about.”

By the end of 2021, four CCJ graduates, ranging in age from 18 to 50, were accepted to the coveted Sound & Telecommunications Technician Apprenticeship Program at the Electrical Training Institute. The program is extremely competitive and only accepts an average of 10 applicants per semester.

If you want something good, you have to put the effort in.

One of the two CCJ graduates to be accepted into both apprenticeships is Gregory Hausler. At 50 years old, Gregory had former construction experience prior to enrolling in CCJ, working for many years as a shipfitter and pipefitter. Even with his relevant professional experience, he ran into barriers while trying to re-enter the workforce.

“If you want to do construction, if you’re over age 40, you’ll run into age discrimination because of two main factors,” says Gregory. “One, you just aren’t going to be as good with technology as someone who is younger. And two, if you are going into electrical (like Inside Wire), you’ll run into issues with physical mobility. If you want something good, you have to put the effort in.”

Once connected to CCJ, Gregory found his options opened up. As a CCJ program graduate he was not only able to waive the testing—which he says was a major barrier-breaker—but being a program graduate also gave him a real edge over other applicants. “Had it not been for CCJ, I would not be in the apprenticeship program.”

My career goal is around getting people together to work together toward something bigger than us.

Richard Gaoiran is another CCJ graduate who was accepted into both apprenticeships. Richard’s first introduction to construction was watching his dad work on job sites as a union member. Inspired by his father’s leadership abilities and the respect he showed for his crew, Richard grew determined to follow in his father’s footsteps, both as a professional in construction but also as a compassionate leader.

However, before enrolling in CCJ, Richard ran into a roadblock: he took the licensing exam a couple of times and did not pass. He was disappointed and frustrated but his family helped push him to keep trying. Through his training in CCJ and ETI, he felt not only a boost in his abilities and skills, but also his confidence. “Without the support of my friends, family and fellow crew members, none of this would be possible,” says Richard.

For the next four years, Richard will focus on completing his apprenticeship. When he is done, he plans to get his associate degree in business. With a business degree and his certification from ETI, he’ll be ready to start planning the creation of his own company.

“Starting my own company is part of the eight-to-ten-year plan,” Richard says. He envisions his future company to be focused on meeting low-voltage needs like security systems and other systems that keep people safe now and in the future. He is most interested in helping people live safer lives while providing jobs and work opportunities to the next generation of electricians. “My career goal is around getting people together to work together toward something bigger than us,” says Richard.