In a presentation titled “Supporting Veterans as they Transition to Civilian Employment” at the 2019 California Workforce Association Meeting of the Minds Conference in Monterey, researchers from BW Research Partnership and the San Diego Workforce Partnership discussed challenges and obstacles that veterans face as they enter the civilian workforce. 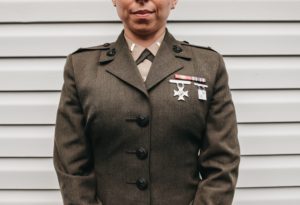 About one in 10 adult residents in San Diego County are veterans—the third-highest veteran population in the U.S.

Nearly a quarter of a million veterans live in San Diego County, accounting for 9.1% of the adult population.

Yet, unemployment rates are higher among certain veteran populations than their non-veteran counterparts. Despite having higher educational attainment on average—as well as years of valuable skills development and training through their service—unemployment rates among young as well as recently separated veterans are higher than their non-veteran counterparts.

More than half of the veterans in the focus group felt their skills from the military did not translate to a civilian role.

A majority of veterans in the focus group felt that their military skills did not translate to a civilian role. Interestingly, nearly all veteran focus group participants had heard of the O*Net military skills translator but fewer than half had used it, and even fewer felt it was useful.

On average, employer perceptions of veterans’ resumes, non-technical workplace skills and technical skills were higher among employers in energy, construction, utilities and public administration than among biotechnology, life sciences and information and communication technology employers. This finding suggests that career navigation strategies should include the expectations and general requirements of industries and occupations.

There is a need for increased career navigation, including drafting role-specific resumes and cover letters. All respondents in the veteran focus group felt that putting together a resume was easy or manageable. However, one out of six employers cited generic or erroneous resumes and cover letters as common mistakes made by veteran applicants. This disconnect suggests there is room for substantial progress in veteran career navigation training and workshops.

The Workforce Partnership plans to help address some of the challenges uncovered by:

Photo of veteran by Hannah Skelly on Unsplash