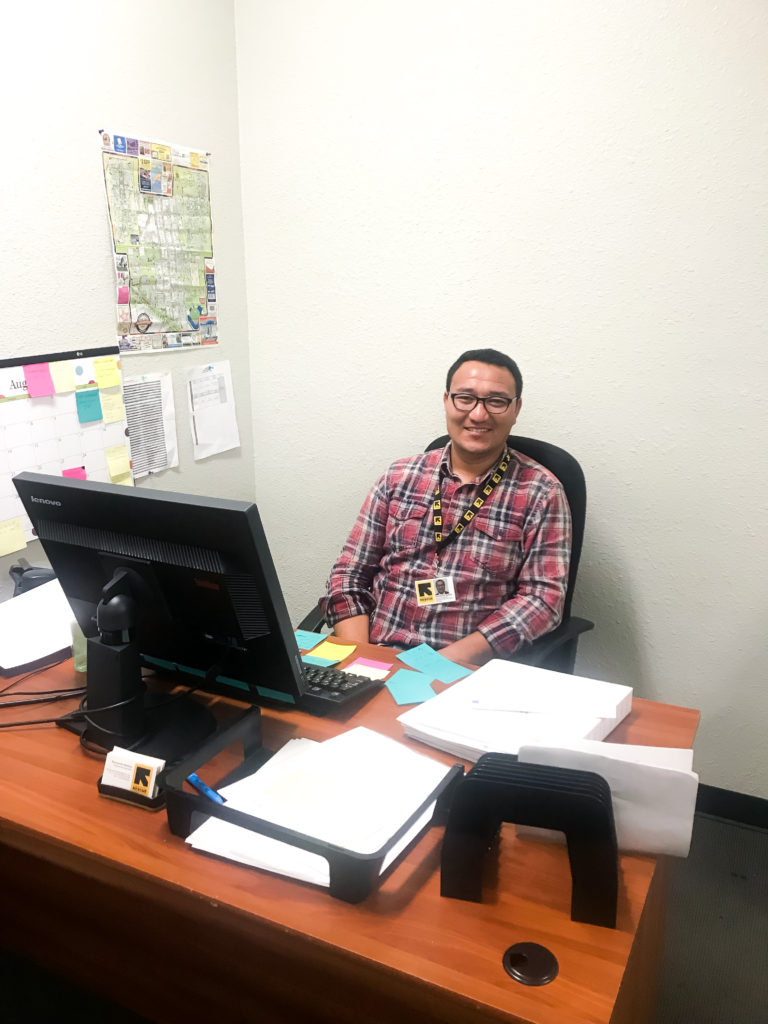 The Special Immigrant Visa (SIV) is made available to those who worked with U.S. or NATO troops as a translator or interpreter during the wars in Iraq or Afghanistan. Since December 2014, the U.S. Department of State has allocated a total of 14,500 visas.*

Rahmatullah Mokhtar is one recipient.

After graduating with an associate degree in public administration, Rahmatullah had trouble finding work, despite the fact that his family used to be tribal leaders in Central Afghanistan (addressed as Meer) and are relatively affluent.

“There wasn’t much in the way of employment opportunities in the market in Afghanistan,” Rahmatullah says. “I think perhaps that due to insecurity there is no stable economy in the country. I thought, ‘well, let me contribute in another way.’”

Rahmatullah, who speaks Farsi (his native tongue), English, Pashto (spoken in Afghanistan) and Urdu (spoken in Pakistan and India), decided to work as an interpreter for the U.S. Armed Forces in Afghanistan for nearly three years.

“Working with the U.S. Army—I knew the risks. My first nine months I was sent to a province very far from the capital—the worst war zone in the country,” Rahmatullah recalls.

That province turns out to be Helmand Province, a major Taliban stronghold and one of the battlegrounds in the fight against insurgents.

Every three months interpreters are given a 15-day leave. Rahmatullah’s colleagues noticed he wasn’t taking his leave.

“I was trying to save money and resign after a year, so I could continue my education,” says Rahmatullah.

Another reason Rahmatullah didn’t take leave is safety concerns: “We are not in our communities much due to work. On the weekends I stay away from my community too. Not so much in the city, but in the suburbs, they target interpreters a lot—they kill, kidnap and torture them. When you hear about that happening to other interpreters, even if you don’t experience anything, mentally you don’t feel safe.”

When the opportunity to apply for the Special Immigrant Visa came up, Rahmatullah took it.

As a member of the Hazara ethnic group, Rahmatullah and his family were at risk of being targeted in attacks. The Hazaras, who are primarily Shia Muslims, are a minority in a country where most follow the Sunni branch of Islam. The Hazaras were victims of a genocide and sold as slaves in Pakistan and Iran in the 19thcentury.

Rahmatullah’s nine siblings and father—a businessman and politician—now reside in Kabul, the capital and the largest city in Afghanistan.

When President Obama started pulling troops from the country during his last two years in office, Rahmatullah was laid off due to downsizing, and eventually went on to earn a bachelor’s in business administration and went to work for the Afghanistan Chamber of Commerce as a government relations manager for a year before his visa was issued.

He also volunteered for a time with UN-Habitat, the United Nations agency for human settlements and sustainable urban development, and was eventually elected to represent a community of families for a rebuilding project.

In between serving as an interpreter and leaving the region, Rahmatullah even worked as a carpet weaver in Pakistan.

Rahmatullah got his SIV and arrived in the U.S. in 2016, shortly after getting married in Afghanistan.

Because Rahmatullah got married in the two years since applying for and receiving the visa, his wife Masooma had to apply for her own visa, and they were kept apart from each other for almost eight months while he resettled in the U.S. and she remained behind in Afghanistan while waiting for her visa.

Due to safety concerns, Rahmatullah can never return to his birthplace in Central Afghanistan.

“Social media is a headache for me. I feel helpless when I see news from back home on Facebook. I cannot do anything, but I suffer.”

Through an interpreters’ advocates group run by U.S. veterans (No One Left Behind) and after a stint delivering for Pizza Hut, Rahmatullah learned about the career workshops at the International Rescue Committee (IRC) in San Diego.

He joined the English Language Learner Navigator Program in March of this year and enrolled in the East County Career Center as well as the IRC’s Management in Customer Service Bridge Program, a sector-specific career pathway program providing contextualized foundational skills, curriculum-based classroom training for the service industry, and occupational skills training and certification from SDSU’s College of Extended Studies.

“Coming from a different culture, I learned resume and interview skills that apply in American culture.”

The bridge program model includes employment and financial coaching, benefits screening, access to income supports and connection to additional services. WIOA Title I-funded supportive services were used to support Rahmatullah in pursuit of his goals and upon completion of his training he was hired by the IRC for a part-time temporary position in their employment department.

Within three months, Rahmatullah earned a full-time position with benefits and a wage increase. In order to further expand his opportunities and through support from the career center, Rahmatullah gained access to ITA/WIOA-funded training dollars to begin a 15-month certificate program in accounting from UCSD Extension, which he looks forward to completing in 2019.

Rahmatullah has been working since May of 2018 as an employment specialist with the IRC in San Diego, where his multilingual abilities come in handy working with immigrants and refugees from all corners of the world.

When asked if he is OK sharing his name and story publicly, Rahmatullah says, “I believe I have to share my story with whomever is interested.”

Hearing about his clients’ sometimes very tough circumstances, Rahmatullah says, “In the beginning I was hesitant. But now I want to raise my voice. I want to share my experience with anyone interested in the immigrant experience. I shouldn’t be silent anymore. It’s not only for myself.”

After he completes his CPA certification, Rahmatullah hopes to own a financial audit or tax firm someday. His wife Masooma is now here with him, along with their young son Shayan, born here earlier this year. Shayan is a Farsi name meaning “deserving, worthy.”

*The program will end once all the allocated visas have been issued.