It is said that looking for a job is in itself a full-time job. Richard Clinton took that to heart when he began his job search after being laid off in December of 2017.

Having received unemployment and disability insurance for two years in 2012 after being laid off from a different job, this time Richard was determined to go to the South County Career Center every day to use the computer resources and attend workshops on everything from resume writing to job interview skills.

“My main focus was just to stay busy,” Richard says. “But once I got there I found out about vocational rehabilitation.”

Vocational rehabilitation, or “voc rehab,” is a process that enables persons with functional, psychological, developmental, cognitive and emotional disabilities or impairments or health disabilities to overcome challenges to accessing, maintaining or returning to employment or other useful occupation.

As a veteran of the U.S. Navy where he was boatswain’s mate, Richard received priority of service at the career center.

“I was surprised because I was immediately helped,” he says.

In order to be served under the voc rehab process, Richard took a placement exam for the type of work he desired—computer networking engineer—did job research and took aptitude tests.

After working with the staff at the career center, he received funding to get his certifications at the California Institute of Arts & Technology.

“I didn’t know about the grant money that was available,” Richard says.

Aside from possible funds for job training, why go to a career center when a lot of job search resources can be found online?

“Actually going to practice for an interview is a lot better,” Richard advises. “It was the people willing to help me [that made the difference].” 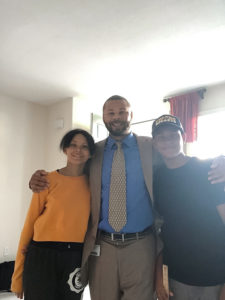 Richard, originally from Toledo, Ohio, came to San Diego with the Navy. Raising three children ages 13–20, he was especially motivated to find a quality job that can support his family.

He now works as a desktop support analyst at ICU Medical, a company based in San Clemente, California with global operations that develops, manufactures and sells medical technologies.

Richard and his fellow churchgoers were so surprised he found a job within six weeks (compared to his previous length of unemployment) that he did a presentation on the career center to other members at his church.

Of Richard, Gloria recalls he was “very responsible, respectful and appreciated about the services provided at the center.”

Richard has sound advice for those looking for a job:

To find a career center near you, visit workforce.org/careercenters.