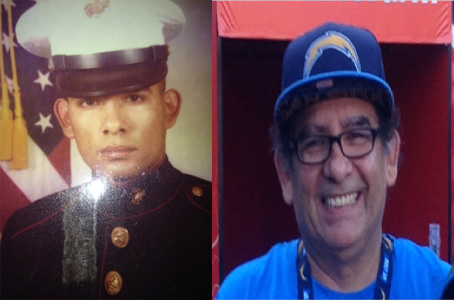 In 1999, Andrew S. Colunga retired from the U.S. Marine Corps after 22 years of service. His aviation background landed him a job at Boeing, but when the three-hour commute back and forth to Long Beach became too much, Colunga was ready for a change. He was surprised to find out that veterans receive priority services at all America’s Job Centers and took the advice of the Employment Development Department to visit the North County Coastal Career Center.

The center connected Colunga with a program created to place veterans in three- to six-week training programs in a variety of trade fields. In a few short weeks, he was ready to begin a career in plumbing. After completing his training, Colunga was matched with a job at a plumbing company, where a senior plumber took Colunga under his wing for two years of apprenticeship training.

After working in the field for 16 years, Colunga was recently laid off. He immediately returned to the North County Coastal Career Center for help finding his next position. Colunga quickly realized that times had changed when it came to finding a job—computer skills were now an essential part of the job search. He began taking workshops to learn new computer and job search skills. Colunga says the center staff were patient and motivating as he waited for the job that was right for him—working with him on his computer skills and tailoring job leads to his skills and goals.

Colunga also received help creating and polishing his résumé, a service he says made all the difference in finding a job. “Creating a résumé was all new to me. I was only used to applications,” says Colunga. “When I corrected my résumé I got a call right away.”

On October 6, 2015 Colunga started a full-time position with Vets 4 You Plumbing, Heating and Air in Oceanside. He says taking the job is one of the best decisions he’s ever made. “These guys are veterans too and the military in general is all about teamwork,” says Colunga. “It’s hard to find that in a civilian job.”

Colunga says he wants to continue working full time as long as he is able to and will continue with employee training to keep updated on new codes, practices and products in his industry.

“Job seekers should not to be afraid to seek help from the career center if you are laid off or not working,” says Colunga. “Being unemployed after my lay-off was a new thing for me. I was not used to changing jobs or sitting around. The CalJOBS website and the North County Coastal Career Center are what helped me find employment.”