The nexus of systemic racism, criminal justice and economic opportunity

Understanding the inextricable linkages between systemic racism, criminal justice and our ability as a nation to offer economic opportunity for all 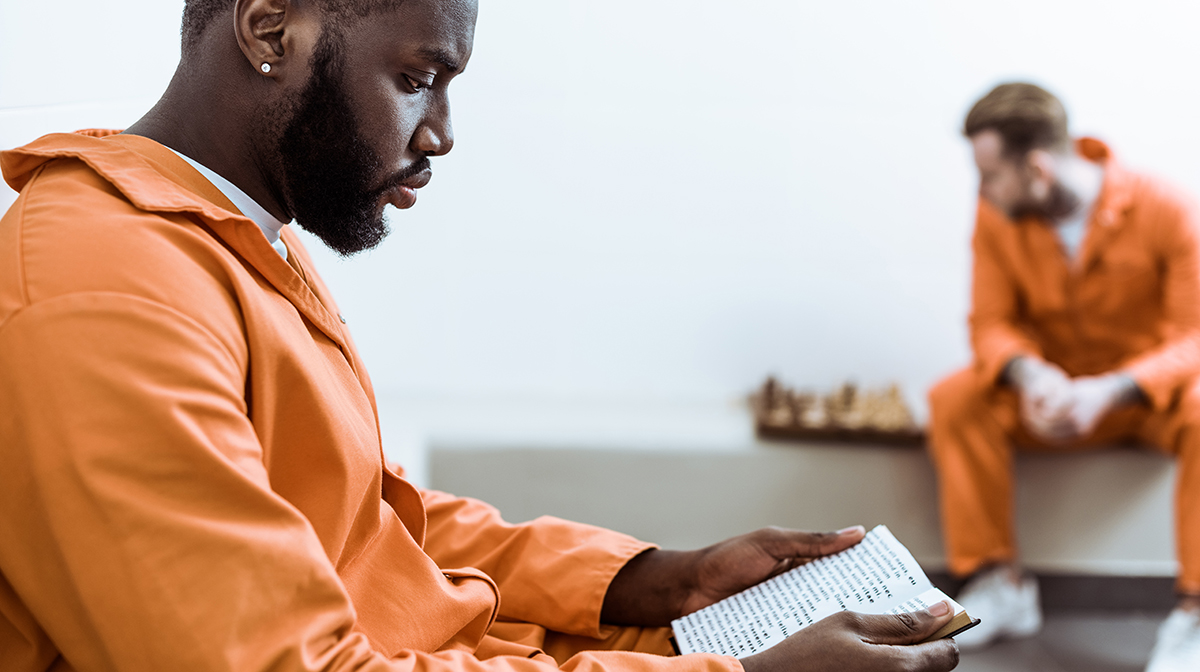 The evidence of racial bias in our criminal justice system is overwhelming. But a critical piece of that conversation that isn’t as often addressed is the interrelation of racism in the justice system and the impact that reverberates out to our economy and workforce—which have lasting consequences for our society.

The average cost to incarcerate an individual in California is $75,000–greater than the tuition, room and board cost to send someone to Harvard University for the year. And yet, 74 million Americans have criminal records—about as many as have college degrees. 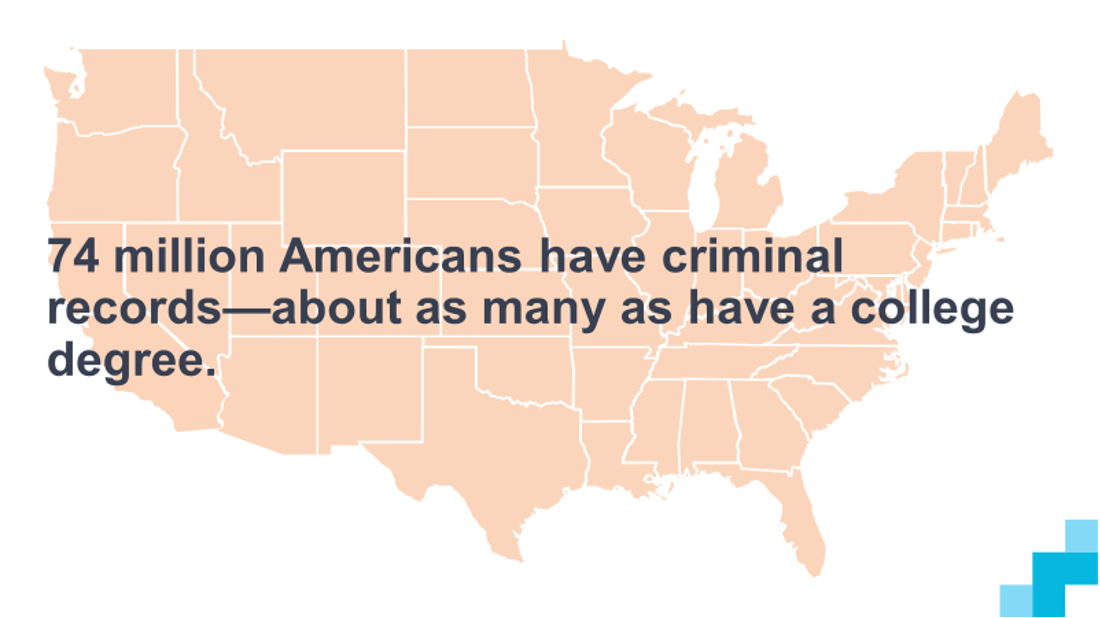 We’ve been sharing data in our series of articles focused on equity demonstrating the disparities faced by Black, Indigenous and People of Color (BIPOC), and other marginalized communities. Yet despite the overwhelming evidence, I find myself still hearing this problematic argument that poverty or unemployment stand alone as the causes of disparities, not systemic racism.

But in fact, racism perpetuates poverty among BIPOC and leads communities to be stratified into living in neighborhoods that lack the resources of white peers with similar incomes. They are interrelated, to be sure, but study after study show that even after adjusting for socio-economic factors, racial inequity persists.

A Deeper Look at Disparities Between Incarceration and Economic Mobility

Discrimination in the justice system—whether in policing, criminal prosecutions, trials, sentencing or imprisonment—is directly related to the poverty and economic mobility of our society. Though our laws are much less explicitly racist today than they have been in the past, our public and private institutions continue to discriminate against BIPOC.

When providing this data to the community, I’ve heard so many common and problematic retorts:

So are you saying all cops and judges are racist?

Name one racist law; there are no racist laws, so racism can’t exist.

Sharing data to demonstrate systemic racism often wrongly interprets this as an accusation that everyone in the system is racist. In fact, systemic racism means almost the opposite. It means that we have systems and institutions that produce racially disparate outcomes, regardless of the intentions of the people who work within them.

Here are just  a few examples in our local and national justice system:

How Racial Discrimination Holds All of Us Back

There is a direct link between the bias within the justice system and the bias faced upon release. This is most evidenced by a 2019 study that sent out fictititous resumes to employers, comparing Black and white applicants with identical resumes and randomly assigning a criminal record. The results below should not surprise you that white people were more than twice as likely to get a call back, even with a felony record! 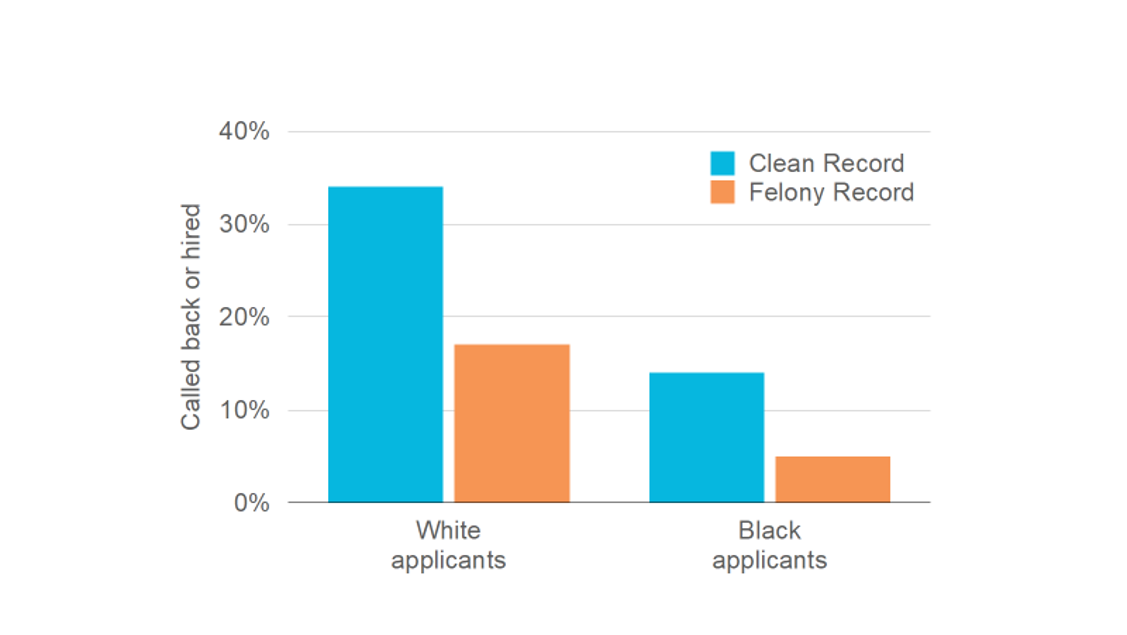 Racial inclusion and income equality are key factors driving regional economic growth. According to the Center for American Progress, racial inclusion is positively associated with growth in employment, output, productivity and per capita income. Regions that became more equitable in the 1990s—with reductions in racial segregation, income disparities or concentrated poverty—experienced greater economic growth as measured by increased per capita income.

Systemic biases affect all of us and prevent us from achieving our full potential as a country. We can never truly become a land of opportunity while we allow racial inequity to persist. And ensuring equal opportunity for all is in our shared economic and societal interest.

We’re a better country when we make sure everyone has a chance to meet their full potential. 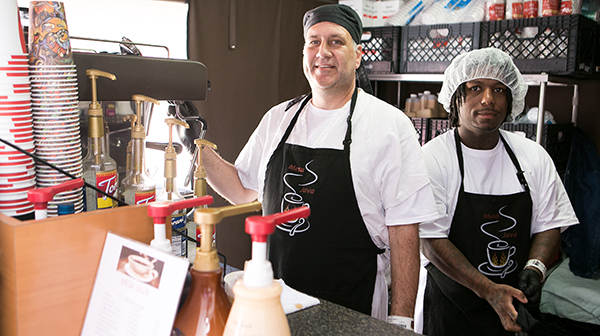 Increasing diversity in the workplace impacts the bottom line. Many studies have found out that companies with more diverse top teams were also top financial performers.

At Johns Hopkins Medicine 20 percent of entry-level hires have a criminal record. A five-year study of 500 individuals found lower turnover and zero problematic terminations. In their words, hiring these workers is “not a charitable endeavor but a strategic part of the way we conduct our business.”

Companies with a diverse workforce make better decisions faster, which gives them a serious advantage. As a result, companies with diversity in the workplace achieve better business results and reap more profit.

Resources available for businesses open to hiring those with a criminal background:

Our Work Focused on the Justice-involved

In addition to sharing reports and data intended to bring light to these issues in San Diego County, we are operating programs within and outside of correctional facilities specifically aimed at serving justice-involved individuals.

The latest addition to Reentry Works is Prison to Employment (P2E), a three-year, $37 million grant to integrate workforce and reentry services across California. The goal is to serve justice-involved individuals by creating a systemic and ongoing partnership between rehabilitative programs within the California Department of Corrections and Rehabilitation (CDCR) and the state workforce system. The program goal is to serve 250 individuals through post-release employment services. Second Chance—in coordination with multiple partners—provides P2E services to ease the reentry transition, provide housing and basic need stabilization, direct job placement and reduce recidivism.

What We Have Learned Serving the Justice-involved

Moving forward in our work to drive equity across those involved in the justice system, we’ve uncovered these key themes: