From mandatory supervision to union representation 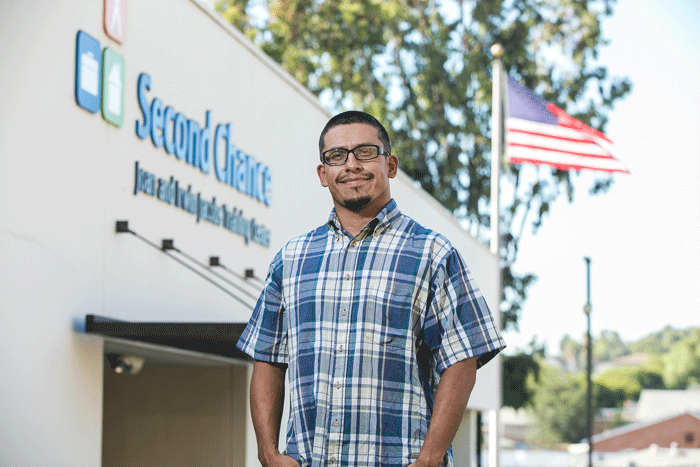 A San Diegan since the age of 7, Jon-David used to enjoy golfing in Mission Valley.

That all changed when he was incarcerated multiple times for multiple felonies. He was sentenced to a two-year “split” in his most recent stay—serving one year at the East Mesa Reentry Facility (EMRF) and the other under mandatory supervision. He completed his year of supervised release earlier this year.

Jon-David was ready to change. He just needed a little help to learn how. That’s when he tapped into the San Diego Second Chance job center at EMRF to help him reintegrate into his community and find a job upon release.

This job center is part of Reentry Works San Diego, the result of a U.S. Department of Labor initiative called Linking to Employment Activities Pre-Release that led to collaboration between the San Diego Workforce Partnership, San Diego Second Chance, the San Diego Sheriff’s Department, San Diego County Probation Department and other justice-involved organizations. In 2015, this work resulted in an America’s Job Center of California location at EMRF, which aims to provide comprehensive career center services to justice-involved individuals. In 2016, a job center opened at Las Colinas, a women’s facility. Second Chance is the operator of both job centers.

Jon-David completed all eight courses the job center offered and said both the Reentry Mapping Course and the Job Readiness Training classes from Second Chance “helped prepare him for the outs.”

“Every other time I went to jail when I was released I really didn’t have any direction on how I was going to get my life back in order,” Jon-David shares. “I had the same attitude that no one was going to hire me because of my criminal background, but this time around Second Chance had started a program inside of EMRF.”

On the same day as his release from EMRF, Jon-David was placed in Second Chance Sober Living Housing. Grateful to have a secure, positive environment to live in while finding his way back into employment, Jon David enrolled in Second Chance’s three-week Job Readiness Training (JRT) workshop. He wanted the opportunity to absorb more employment-related skills, and a chance to increase his self-confidence and self-esteem—two attributes that are essential to success in the job market.

Jon-David completed JRT but didn’t stop there. He enrolled in the Second Chance Pre-Apprenticeship Program, which provided opportunities to join either a union for electricians or for sheet metal workers. He took both exams and passed with flying colors. The Sheet Metal Workers Local Union 206 offered him the first oral interview, and one week later he was accepted as a member. He now takes classes every other Monday and has already been sent out on two jobs. He is currently working on an apartment construction project in downtown San Diego.

Jon-David is thankful to Second Chance for their support: “Second Chance has been with me since the beginning. They helped give me a new direction in life.” He wants to continue growing within the Sheet Metal Union and hopes to join the Electrician’s Union, too. Jon-David is excited about his new career and eager to continue down his path to a better life for himself and his young daughter, mother and grandmother.

“I just think by helping people already have some kind of structure and direction in place before they get out is tremendous,” Jon-David says. “I think that’s a lot of people’s problem—they go back to same behaviors because they don’t know any better or they don’t know about programs like Second Chance.”