Life after incarceration: What it means to survive Beyond the Wall 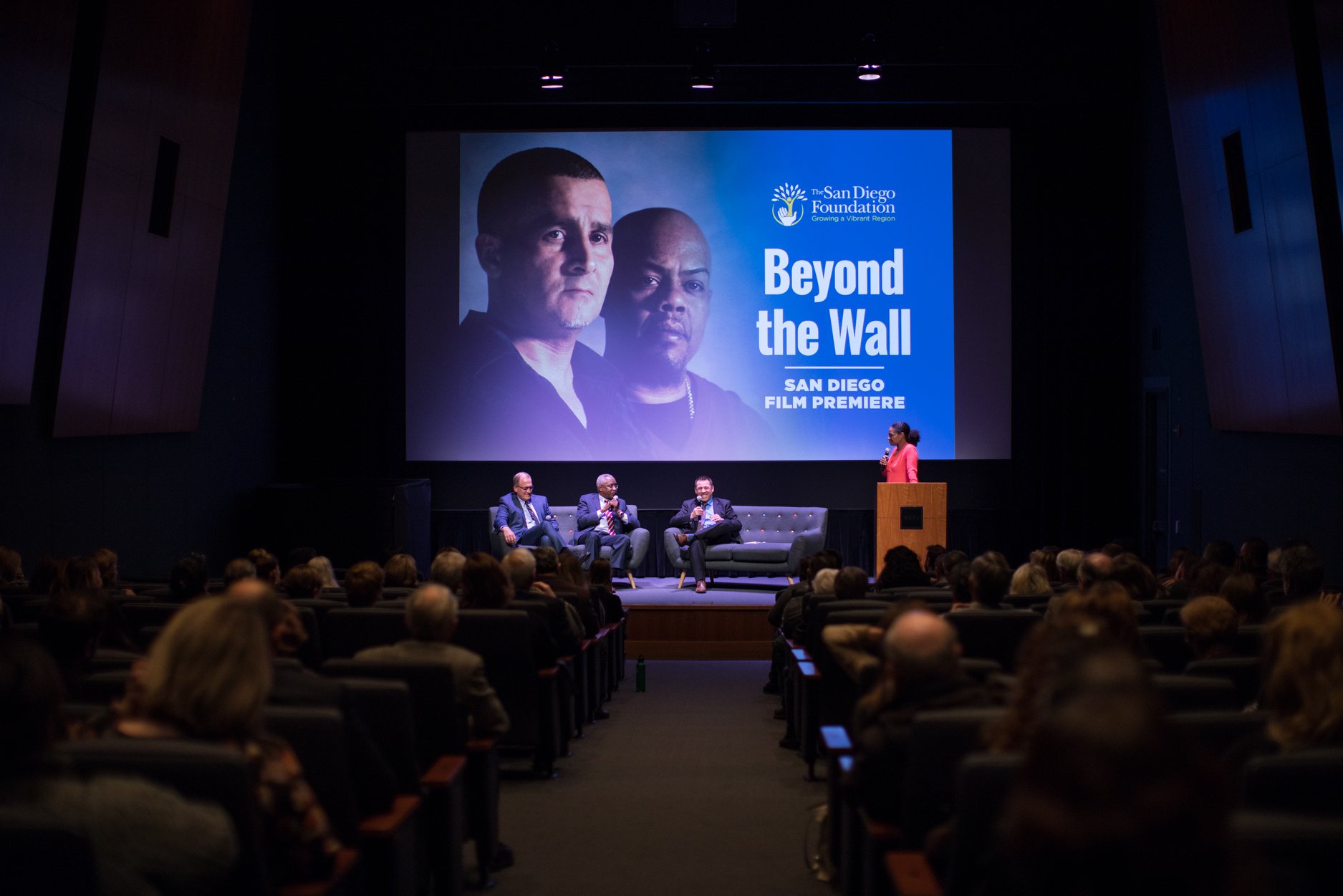 The U.S. incarcerates people at a higher rate than any other country. What’s more, within three years of release approximately two-thirds of the formerly incarcerated are rearrested and sent back to prison. On February 20, The Malin Burnham Center for Civic Engagement at The San Diego Foundation hosted the San Diego premiere of “Beyond the Wall,”  a documentary following five formerly incarcerated men as they attempt to rebuild their lives on the streets of Massachusetts. The Center for Employment  Opportunities (CEO), whose employment reentry intervention has been proven to reduce recidivism, increase public safety and yield the public up to $3.30 savings for every taxpayer dollar of program cost, was a key partner in putting on the program. County Supervisor Greg Cox joined the event to present a county proclamation to CEO honoring their great work in our community.

Q: What did you think of the documentary?

A: My experience with the viewing of “Beyond the Wall” is that it is one of the realest documentaries that I’ve seen in a while. It realistically captures the struggles, challenges, obstacles and achievements that an individual without economical, spiritual, emotional, mental, and behavioral support faces in trying to reengage in their community.

Q: What impacted you the most about the film? 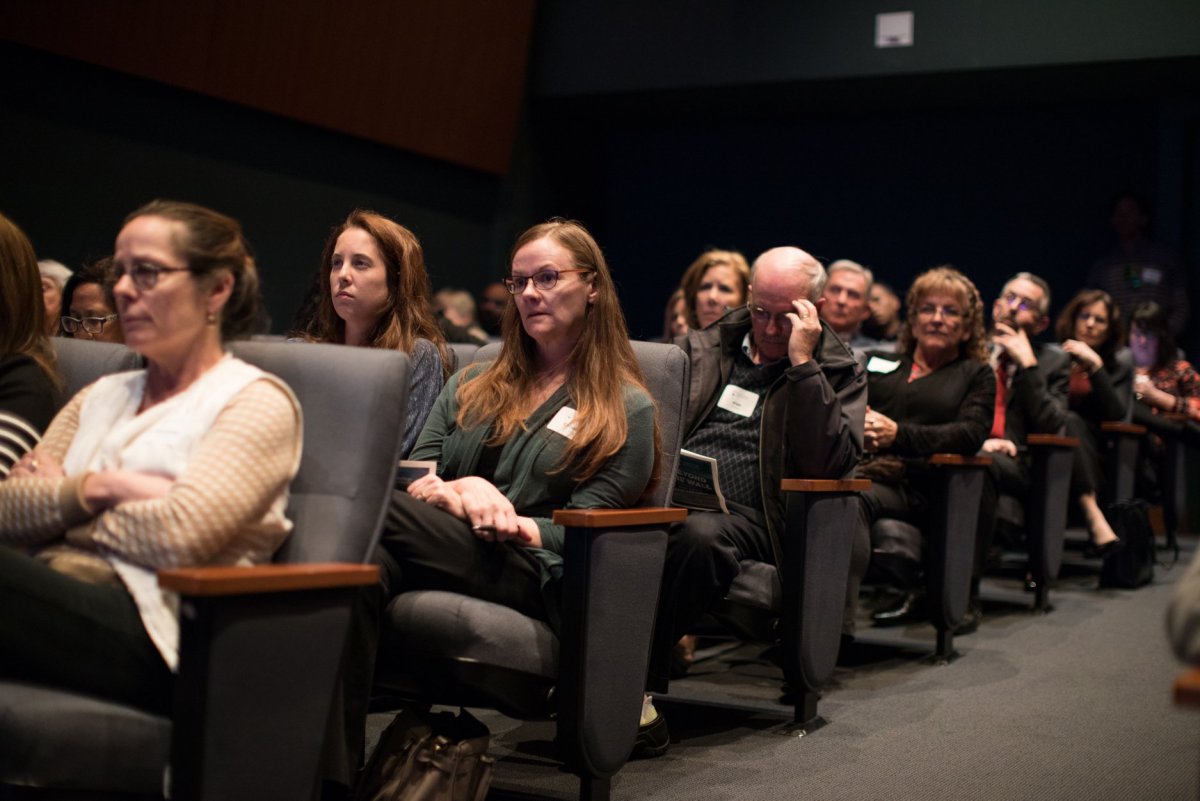 A: One of the most profound statements that was made throughout the film was that going back to your community almost guarantees that you will return to jail or prison. That was extremely thought-provoking for me because part of the work and study that we do in reentry here at SDWP is because we have individuals returning to their communities that are unable to support them. For example, if these individuals are returning to communities where there’s not a lot of access to opportunity, the likelihood of them returning to jail or prison is, well, it’s going to happen.

Another profound statement came from the character known as “Diddy.” He spoke about his many tattoos and was explaining that they represented his “armor” and that his “armor” has kinks in it. That stood out. After watching the film, it made me stop to think about what we could be doing better as an organization in serving these individuals. Although we don’t provide direct services, we contract our work and the question remains: what could we do better?

Q: To that end, what is being done right now?

I want to connect people with opportunities. There are currently job centers inside East Mesa Reentry Facility and Las Colinas. There, our contractor Second Chance provides our traditional workforce development services, such as résumé development, employer engagement, when individuals are about 150 days from release. If they’re released within our community here in San Diego, they can begin to receive post-release services, also through Second Chance.

Q: What about mental health?

A: From a mental health perspective, I think “Beyond the Wall” does a great job of demonstrating the fact that it’s a healing process inside and out for the formerly incarcerated, especially those coming from addiction. Without that continuous support from people, they may not have the mental strength to dive back into society after being locked up for so long. If an individual is identified as needing a behavioral health or mental health service while incarcerated, those services are available. However, it becomes a little bit more challenging upon release.

Q: Let’s talk about the families. What’s their position post-release?

A: I’m going to be very transparent here. I can relate to having a loved one returning home from prison…and that was my father. The individual gets this reentry plan and they’ll meet with a counselor, talk about the things that they’re going to do when they get out, but no one talks to the family that’s having the individual return home. It’s very similar to the military life—your partner may return home from a deployment after six, eight or nine months. I strongly believe that helping the family learn how to adjust and reintegrate is crucial. I think the family needs to be a part of the reintegration plan.

For instance, in the film, Louie Diaz was speaking to one of the formerly incarcerated who happened to have six children. The gentleman had these great aspirations to connect with his children, but no one’s talking to the other parent to see what that would look like. I think future forward we could start thinking about how we better integrate.

Q: Does SDWP have a call to action?

A: Overall, I think our call to action as an organization, other than exposure and bringing awareness on reentry programs, is to educate people on the resources that are available. One thing I would suggest is to have a collective, shared data system for serving people and families that are either directly or indirectly affected by someone that’s been incarcerated. San Diego has a high population of veterans and you have all these organizations and businesses that support veterans, but I don’t think that there’s a collective space to truly identify who does what and how long they do it. I’m thinking of a resource database for a particular population, such as the formerly incarcerated. I think that would be the call of action, is pulling in our resources.

A: We have places like the Reentry Roundtable where providers come together and share information, which is extremely helpful. I believe it would be just as beneficial to have a GIS map that says, if you’re over here in North county, this is where you go for specific resources; a consolidation all data, an interactive map. Resources that give a clear map for the family members of formerly incarcerated would help significantly. It truly takes a village; we need to bring the whole family unit together and not miss this step of the release process.

Q: What’s our role as a workforce development board?

A: When I think about the barbershop resource in “Beyond the Wall” that created a community space for justice-involved individuals, I think of how we can support that as a workforce development board. I loved the fact that the prison referred people to a barbershop right after release because it creates a sense of community involvement. I would love to see funding go toward behavioral health and peer support specialists, creating more opportunities for individuals that were formerly incarcerated to choose a resource best suited for them. Whether it’s alcohol and drug counseling or job coaching, these individuals need support from people who understand what they’ve been through and speak their language.

Louie Diaz exhibits examples of this kind of support in the film. For example, the scene I mentioned earlier where Diddy seems to be experiencing a relapse with his addiction and raises his voice at his counselor Louie, but Louie doesn’t back down despite the intimidating conversation. Diddy begins to express a calm demeanor after realizing that he’s in the presence of someone who truly understands his situation and what may have caused the relapse and/or anger being expressed.

Following the screening, local leaders, experts and attendees engaged in a conversation about how San Diego agencies and organizations are working together to address recidivism and opportunities to improve the criminal justice system and our community. Panelists included:

Thanks to Reentry Works partners, we are working to reduce local recidivism rates through pre- and post-release services. To learn more, contact reentryworks@workforce.org.