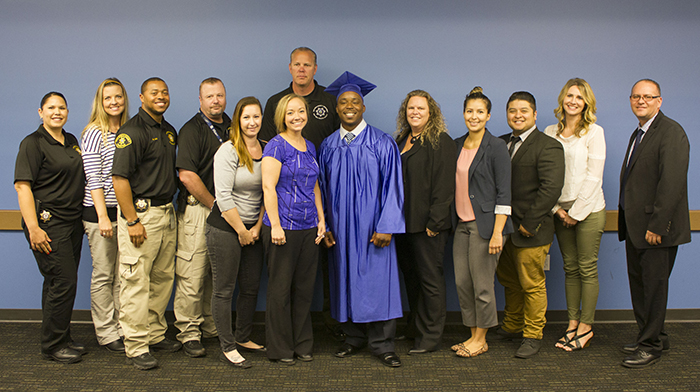 When Desiman Miller first entered the East Mesa Reentry Facility, he promised himself he’d make the most of his time there. He enrolled in over 25 classes and spent his free time reading books focused on learning new skills and bettering himself.

A month before going home, Mr. Miller was introduced to EMRF’s brand new job center, ran by Second Chance and the result of a collaboration between the San Diego Workforce Partnership and the San Diego County Sheriff’s and Probation departments. There he began searching for jobs, building a résumé and creating an email address — all before his release.

“To have that professional help is a big step, says Miller. “I know it helped me — to be confident, to know I wasn’t all on my own…to have all the things that I needed before I even left.” 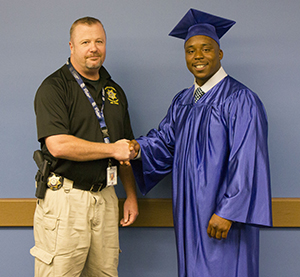 Miller went directly from EMRF into Second Chance’s sober living program, where he was provided with the essentials for his reentry transition, from a living space and hygiene products to food vouchers and change to do his laundry.

“When I got out, I got a running start. I knew I needed money and I knew I needed to do the right thing.” A lesson Miller says he learned while at EMRF, crediting programming there with teaching him that money isn’t everything and being patient is a key to being successful and keeping to your morals and values.

A week later, Miller landed a job. With a full schedule of classes and meetings during the week and 12-hour catering shifts on the weekends, Miller was a busy man. But even with a schedule as packed as his, he was already looking toward the future. Miller plans to enter an apprenticeship program, where he’ll learn a skill that leads to more job security and better pay. He’s already picked out four programs he intends to learn more about at his upcoming Associated General Contractors orientation.

Was the new job center a force in getting Miller hired so quickly? He adamantly says “yes.” “It could have went either way,” he says. “I know for sure I wouldn’t have got a job so fast. I probably wouldn’t be as confident as I was in my job search and just trying to find a job and knowing that I can get a job because I’ve already got these skills…[the career center staff] helped me out a lot.”

Often for inmates leaving a correctional facility, the first thing to gravitate toward is doing what you know. Without support and resources, it’s easy to fall back into negative behavior just to get by.

“A person that takes these resources seriously, [the job center] is going to get them exactly what they need,” says Miller, mentioning that you leave with a plan for housing and getting a job that interests you. “If a person takes advantage of the job center, they will be successful.”