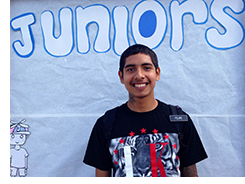 Christian Felipe Oldade, a junior at Crawford High School, had years of behavioral and truancy issues that resulted in multiple suspensions and other disciplinary action. International Rescue Committee (IRC) Connect2Work program, which addresses the academic and skill needs of vulnerable in- and out-of-school youth, aligning their education with relevant, real-world exposure to and training for high-growth occupations, and supporting them in becoming engaged, thriving members of the community.

Since joining the program, Christian has exhibited model behavior and been an exemplary student in his work readiness training, which he says taught him how to look at act professionally. He asks insightful questions, actively participates in all activities, and maintains perfect attendance. Additionally, he has had no reported disciplinary action.

Through the IRC Christian joined an after-school public speaking group called Collective Voices, where he excelled as a speaker and writer. “I liked learning tips on how to talk,” he says. “It challenged me to get better at speaking because I’m good at writing, but speaking is different.”

He also began volunteering as an assistant in the library after school multiple times a week. He enjoys working at the library, he says, because it helps him develop a better relationship with books. He also attends tutoring through the IRC.

Christian is improving his grades and has signed up for SAT Prep classes with the IRC. He regularly communicates with case managers and shows great interest in obtaining an internship. He is open to learning about multiple careers and employment sectors, but says he already has an idea for his future: “I have a plan to go into the military so that I can get training and an education that’s paid for. Then I want to study business and become a businessman so I can earn money.”

The IRC helps refugees who are invited by the U.S. government to come to America to seek safety and freedom. The Connect2Work program Career Pathways include biotechnology, high-tech, healthcare, automotive technology and machining, and cosmetology. For more about the IRC, visit www.rescue.org/sandiego.