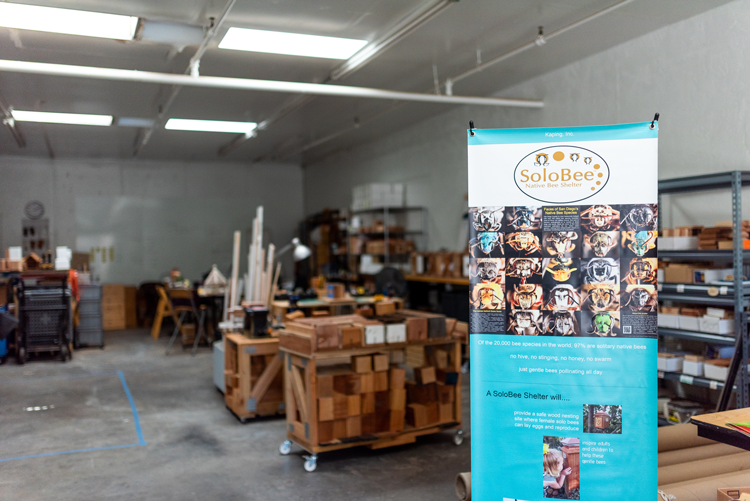 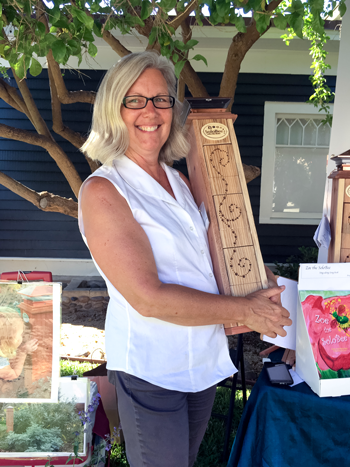 Candace Vanderhoff spent over a decade founding businesses that aim to improve the environment.

Vanderhoff previously had a greywater company prior to her current enterprise, Kaping, Inc., which makes the SoloBee, a pesticide-free nesting place for solitary native bees—the “unstung hero.” 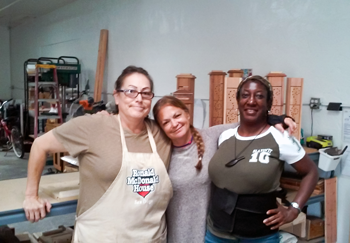 When most people think of bees, they think of the European honeybee introduced to the U.S. in 1600, but there are 20,000 species of solitary native bees all over the world—4,000 in the United States and 700 in San Diego County alone.

Unlike honeybees, which belong to a group called social bees, represent just 10 percent of the total number of species of bees, “Solitary, native bees live alone,” said Vanderhoff. “They are very gentle and rarely sting.”

A female bee would find an abandoned beetle hole in a tree or a hollow stem or dig a hole in the ground where she lays up to 35 eggs, she will also provision the nest with a “loaf” of pollen for the larvae to consume before pupating into a bee.

Unlike honeybees, solitary native bees are not globally distributed, but are native to each region and tend to remain in that region to pollinate both native and introduced plants. Since native bees do not need pollen to make honey, they tend to distribute pollen everywhere, making them 60 times more effective than honeybees as pollinators.

“Many native bees co-evolved with many of our plants and vegetation,” said Vanderhoff, so it makes sense they would be good at pollination—the transfer of pollen from a male part of a plant to a female part of a plant, which allows for fertilization and production of seeds. Over 75 percent of the nuts, fruits and vegetables in the U.S. are pollinated by solitary native bees, making their protection so crucial.

And like honeybees, native solitary bees are suffering because of habitat loss and pesticide use.

That’s why Vanderhoff designed the SoloBee Native Bee Shelter, available on her website, at fairs throughout the region and at Whole Foods in Hillcrest and Wild Birds Unlimited. To create a community of “SoloBee-keepers,” the company numbers each shelter and tracks them on a map. This allows each customer to join in on the mission to help save the solitary bees. One SoloBee shelter is as far away as Geneva, Switzerland.

In 2017, Vanderhoff qualified for $16,000 in funding through the San Diego Workforce Partnership, part of a $1M grant from the EDD in a California Workforce Development Board SlingShot program to serve the advanced manufacturing community in San Diego and Imperial counties. Vanderhoff used the funds to purchase CNC (Computer Numerical Control) machinery and train four people on how to use it. This machine has been able to increase output of parts for SoloBee two- to threefold.

The SoloBee workshop is in an innovation district in Lemon Grove, where she and a part-time mechanical engineer have been making their bee nesting units since August of 2017, in the very same space where Taylor Guitars got its start.

It is perhaps not surprising Vanderhoff started a business building things. Coming from a family of carpenters, she started making her own clothes at age 11, is a licensed building architect and once spent four years teaching at a boys’ trade school in Micronesia. One of the atolls where she spent time—Kapingamarangi—is the inspiration behind the name of her company.

Vanderhoff is so passionate about native solitary bees that she’s written a children’s singalong song book about their life cycle called “Zoe the Solo Bee.” Zoe is the name of her young niece, who has learned to sing the song featured in the book, which talks about ways to protect the bees:

They could use all the hydration they can get in our dry climate.