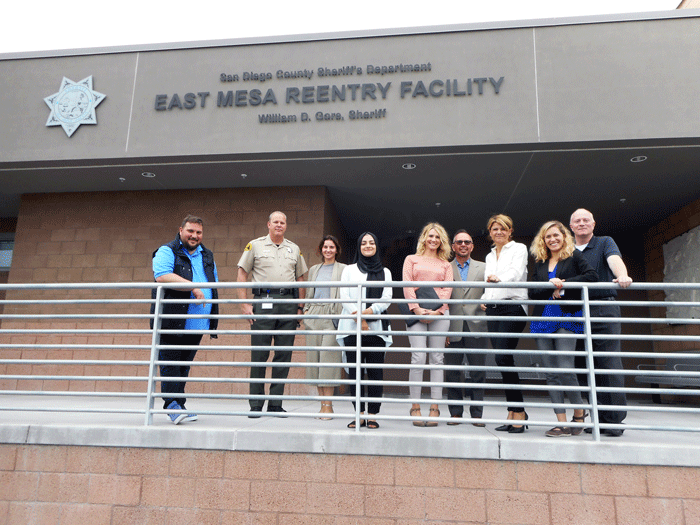 On August 23, a delegation from Frankfurt, Germany learned about the East Mesa Reentry Facility (EMRF) and Reentry Works on a visit made possible by the U.S. Department of State’s International Visitor Leadership Program.

The group comprised individuals with various backgrounds, including a police officer, an attorney, a political scientist and a prison staff member. The group was interested in learning about racial politics and gang dynamics in prison, in an effort to understand triggers and patterns behind extremism and radicalization.

The delegation learned that while inmates are self-segregated by race in the residences and dining areas, taking shifts to eat to avoid mingling with other racial groups, workshop participants of different races were instructed to collaborate with each other on assignments and projects. EMRF staff address the observed patterns of segregation by having inmates intermingle with peers outside of racial classification during programming activities and work sites. Though social interaction between racial groups was enforced rather than organic, the groups usually work well together in accomplishing their assigned tasks.

A visit to the East Mesa Reentry Facility gave the delegation an opportunity to examine efforts designed to build a strong community resistant to violent extremism. In this case, the group learned about Reentry Works and strategies for encouraging employment for the formerly and currently incarcerated.

The delegation’s visit was facilitated locally by the San Diego Diplomacy Council, a nonprofit, nonpartisan organization that has previously brought international delegations to the San Diego Workforce Partnership (SDWP) to learn about workforce development and education. EMRF is a medium-security facility in south San Diego County near the Otay Mesa border crossing that offers opportunities to work. SDWP, with the partnership of San Diego Second Chance (the program service provider), the San Diego Sheriff’s Department and San Diego County Probation Department and other organizations, opened an America’s Job Center of California location career center there in 2015 as part of Reentry Works, a grant program funded through the U.S. Department of Labor’s Linking to Employment Activities Pre-Release initiative, which aims to provide comprehensive career center services to justice-involved individuals.