From always applying to advocating 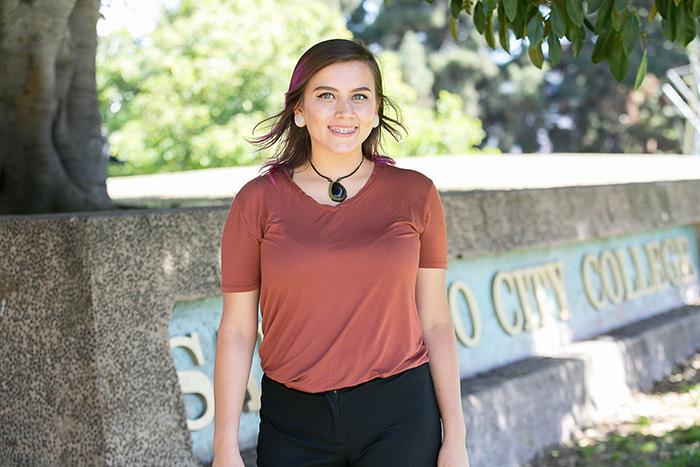 When Alicia Vasquez found out she’d been placed at the San Diego Workforce Partnership (SDWP) for job shadow day during her senior year, she wasn’t sure what to expect.

It is thanks to that experience, however, that Alicia learned about CONNECT2Careers (C2C), a youth employment program administered by SDWP. “When I first signed up for C2C, I didn’t really know what the possibilities were,” Alicia says.

Alicia completed two externships during her winter and spring breaks. The first was with the San Diego Housing Commission. The second brought her back to SDWP. “They were really good jobs,” she says. “Exciting, professional jobs you can build on.”

And that is exactly what Alicia did—instantly applying to be a peer job coach.

Her newly gained experience helped Alicia land the position—a huge milestone for someone who had been looking for work since she turned 16 two years before. “I couldn’t get a job because I didn’t have experience, but I can’t get experience because no one would give me a job, so it was this never- ending cycle,” she says. “It was horrible.”

Relatability is key when it comes to helping other young adults like her find jobs. “It’s relaxing and comforting to talk to someone who is similar to you,” says Alicia. “I noticed what worked so well is that I am in a similar situation now.”

Toward the end of the summer Alicia was hired as an outreach ambassador for City College, where she now works while also going to school full-time.

She’s still exploring majors, but wants to minor in business in hopes of one day starting her own, possibly a nonprofit. “Working at SDWP showed me how much I love to help people.”

Alicia believes getting the word out about C2C is tremendously important and has become one of the program’s biggest advocates; she points every young adult she meets to the C2C portal. “There’s no catch,” says Alicia.

“Just dedicate your time. I just wish people knew how helpful C2C was. C2C has been an invaluable opportunity for myself. I can honestly say it changed my life.”