Not long ago, Eugene Beronilla could sum up his employment situation as “overqualified and underemployed.” Fortunately for Beronilla, who had been looking for work for over a year, this happens to be the name of one of the workshops available to job seekers at the San Diego Metro Region Career Centers, operated by KRA and funded by the San Diego Workforce Partnership (SDWP).

After his contract employment ended in June 2012, Beronilla began looking for work—and it wasn’t easy. He applied for about 50 jobs and wasn’t finding opportunities for interviews for mid-management-level positions, let alone job offers. 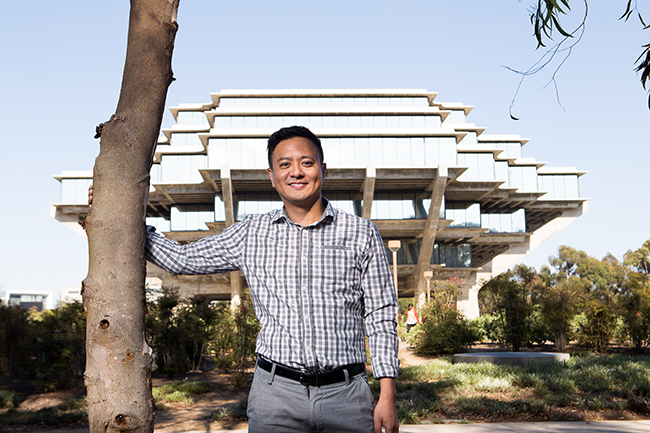 Beronilla soon realized that his personal strategies weren’t producing results, and what had worked for him in the past no longer applied in a new economy where jobs were less available and more competitive. He worried that as weeks of unemployment turned to months, applicant screeners and hiring managers may wonder if something was wrong with a well-qualified person who could not find employment. “I felt that the longer I wasn’t working, the less attractive I was to hire,” he says. Further, with his federal checks coming to end, he quickly exhausted his retirement and savings to keep up with basic bills. So he swallowed his pride and reached out for help.

Now considered a “long-term unemployed” individual (unemployed for more than 27 weeks), Beronilla began exploring resources at the Metro Region Career Centers, offered to him as a recipient of Unemployment Services. He was somewhat unsure at first about how he could benefit, but after being unemployed for more than a year, he put his full trust into the Career Center resources. He took advantage of almost all of the classes available to him, from “Finding Hidden Jobs” to “What to Say in a Job Interview.”

“I felt humbled when I learned there were so much information about job searches, skills tests, and the different kinds of jobs out there that were suited for me,” Beronilla says. “I learned strategies to make my résumé succinct and tailored to employers’ needs.” He adds that one of the most useful job search tools was the “30-second commercial,” which he learned in a Career Center workshop. In short, he learned how to “sell” himself by providing his name, qualifications, what he was looking for in a job and how he could contribute to the company—all in 30 seconds. “As cheesy as the title may sound, it really helped me with interviews,” he says.

In January 2014, Beronilla met with Congresswoman Susan Davis, SDWP CEO Peter Callstrom and SDWP Director of Adult Programs Mark Nanzer as part of a roundtable discussion about the extension of federal unemployment benefits. Davis has been an advocate for renewing unemployment insurance and a co-sponsor of legislation in the House to extend benefits. “Working with Congresswoman Davis really boosted my self-esteem and helped me be more confident in my ability to clearly convey my story,” he says. “It put me back on my professional feet.”

Soon thereafter, Beronilla got an interview with UCSD. A friend had referred Beronilla for the job, which he says underscores the importance of networking in the job-hunt process. “It certainly helped that I knew someone,” he says. “But I still had to present a résumé and work through the interview—and the tips I got from the Career Center helped me tremendously with that. One of the interviewers even said that she was really impressed with my résumé.”

Then in February 2014—more than a year and a half after being laid off—Beronilla was offered the job at UCSD, working as a manager handling the education, training and outreach services for San Diego County’s immunization services through the San Diego Immunization Program. Further, he is taking as many certificate and skills-building trainings as he can, including those related to Web development and effective leadership.

Having been through this experience, from months of job-searching to working with a Congresswoman, Beronilla has a unique perspective: “Long-term unemployment is like a triple whammy. Not only did it impact my finances and marketability when applying for jobs, but the most damage was to my sense of hope and self-esteem. I felt defeated. It’s a slippery slope because those unattractive emotions of sadness, fear, anger and even desperation come out when interacting with potential employers, from job fairs to interviews. And when you get rejected yet one more time, you fall deeper in that spiral. When Congresswoman Davis took my story to Capitol Hill, it made me feel validated and heard, and that allowed me to do so well in my next, and ultimately last, interview.”

Beronilla adds that he is thankful for the hope and structure provided by the Career Center and, as such, would like to find a way to give back. Specifically, he would like to work with the Career Centers to develop peer-led support groups that can help with the mental health of long-term job seekers. “There’s something about going through long-term unemployment that few people can understand unless they have been through it too,” he says. “I’d love to help create a platform where people can talk to each other about their experiences, ultimately helping build their hope and self-esteem, and keep them moving forward in their process.”