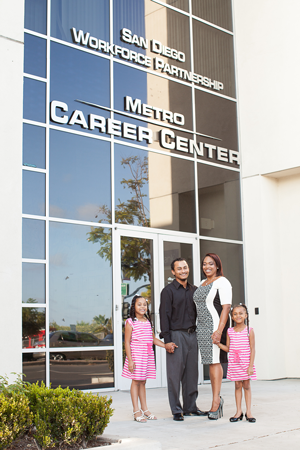 Chante Yuban Brookins was working as a preschool teacher when she lost her job. For the next two months, she took on the odd cleaning or babysitting job.

For the rest of the following year Chante did not have luck with her job search; she worked for about two months out of the year and was feeling incredibly discouraged. Her family eventually lost their home, and she, her husband Michael and their 5- and 7-year-old daughters stayed with relatives for several months.

She expressed to her CalFresh case manager her desire to get back to work, and learned about the San Diego Metro Career Center in City Heights, one of 12 America’s Job Centers of California (AJCC) sites funded by SDWP.

In January of 2014 she met a Business Services Representative (BSR), who helped Chante revamp her résumé and do mock interviews. Once the BSR helped Chante see that her experience of tracking the progress of three-year-old children’s early reading and math skills can be translated to highly marketable soft skills, Chante gained a new sense of hope and confidence to pursue a long-term career rather than just a job.

Over the course of a month Chante completed online training on customer service and marketing. Chante’s BSR witnessed her strong enthusiasm and work ethic, and referred her to Farmer’s Insurance for a part-time administrative assistant position through Expanded Subsidized Employment (ESE), a program offered by SDWP that reimburses companies up to 100 percent of the wages for the employee’s first 180 days. Chante was immediately interested in working for such a well-known and established company with opportunity for growth. After two interviews and an assessment, Chante was offered the position. She plans to become an insurance agent and is now studying for the insurance license exam.

“ESE is a brilliant idea,” says Chante. “It helps the employer and helps people prove what we are capable of. I used to be so stressed about school clothes and food banks. I can now pay the bills and do regular grocery shopping again.”

Shortly after Chante started her job, her husband Michael also found a job through ESE — a full-time landscaping position with Rainscape Environmental Management. He loves working outdoors, and though the work is physically demanding, Chante says it is gratifying to see him come home with a smile on his face.

“I think my family would have continued experiencing the same fate as we had last year if it wasn’t for my representative and the career center. She really helped us turn things around for our family,” says Chante. “I experienced real kindness. It has been such a humbling experience.”