Prior to joining the Workforce Income Share Agreement (ISA) Fund, Ari Emdur was working as a stagehand and wasn’t getting the hours he needed at his job to support his family. To earn extra income, he was delivering for Postmates but, as Ari says, “it was a pretty tough way to make money and a lot of wear and tear on my vehicle.” 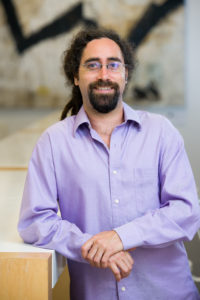 After his mom saw a segment on the news about the San Diego Workforce Partnership’s ISA fund she sent the information his way. Ari was interested in tech and data but knew he needed to learn new skills if he was going to get a job in his dream industry. He thought an ISA might just be the perfect way to break into tech. It turns out he was right.

“I needed more technical experience,” says Ari. “I was just spinning my wheels where I was.”

The additional support offered through the Workforce Partnership—such as peer to peer support, job coaching, access to equipment and more—provided support he would not have otherwise received through a certificate program.

“The Workforce Partnership framework and having a Slack channel built with your classmates was so important for the learning process,” he says.

Ari graduated in March along with the rest of the Workforce ISA Fund’s inaugural cohort. With very few job openings due to COVID-19, he spent a lot of his time continuing to develop his new skillsets, creating practice projects and building data dashboards to show potential employers. He also began learning Python with his 14-year-old son.

In addition to leaning into skill building, Ari worked with the Workforce Partnership team to get job-ready, making substantial changes to his resume and participating in mock interviews and other training.

“It was a goal of mine to break into the tech industry and I was able to accomplish that through the ISA program.”

In early June, a former classmate reached out via the Slack channel to let everyone know that the company he joined six months ago was hiring. Ari was one of several graduates who applied for the role and, after going through a multi-stage interview process, was offered the job. He started as a configuration specialist at MedImpact Healthcare Systems at the end of June.

Ari’s hard work and dedication to his new craft and the ISA program paid off. “I’m just at the beginning stages of my career and I’m learning and growing,” he says. “I wouldn’t be anywhere without this program.”

The role offers a large increase in salary compared to what he was making at the local theatre company and gives him a chance to work in an industry he’s been looking to enter for several years.

“It was a goal of mine to break into the tech industry and I was able to accomplish that through the ISA program,” says Ari.